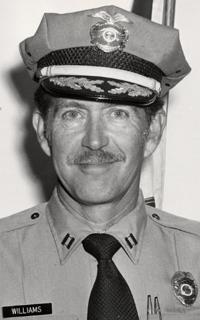 Benjamin J. 'Ben' Williams, 77, of Pueblo, Colorado. Sunrise, August 28, 1927. Sunset, March 20, 2005. Tall. Handsome. A good, old-fashioned, honest cop. Ben was born in the original Corwin Hospital in Pueblo to the union of Ben D. Williams and Mabel May (Cox) Williams, who predecease him. He was the eldest of 4 children; Hiram D. (Donna) Williams, Mabel M. (John) Bassett and John E. (Brigette) Williams. He attended school in Rye and received his diploma from Central High School, Class of 1945. Ben enlisted in the U. S. Navy and proudly served aboard a transport ship during World War II. In 1950 he began his career with the Pueblo Police Department and spent over 34 years there, retiring in 1984 with the rank of Captain. During his career he held many positions including Motorcycle Patrolman, Watch Commander, Detective and Narcotics Officer. Many will also remember him from the years he spent as a security officer at the Sangre de Cristo Housing Project. It was at the Police Department that he met and married his sweetheart, Carrie. Although Ben loved hunting and fishing, he was happiest when he and Carrie were raising cattle on their acreage on Cortner Road. He especially loved the calving season. After retirement from the Police Department, he continued to serve the public as a driver for the Citi Lift for 7 years. Ben leaves to cherish his memory his wife, Carrie, her children and grandchildren who shared Ben's life for 23 years, George, Kavon, Nick and Scott Rueter, and Tom, Lynn, Kindra, Joni and Ali Procell; son, Robert A. Williams; stepson, Juan Ulibarri; his siblings as mentioned above; numerous nieces, nephews, cousins and a multitude of friends. For those who wish to pay their respects to Ben's memory, there will be viewing on March 22nd and 23rd from 10 a.m. to 6 p.m. at the Montgomery & Steward Funeral Home. Services will be held at Westminster Presbyterian Church, 10 University Circle, at 10 a.m. on Thursday, March 24, 2005. Military honors by the Pueblo Police Department Honor Guard and interment, Roselawn Cemetery. The family will receive friends at the American Legion Hall, 9th and West, immediately following interment. In lieu of food or flowers, contributions may be made to either the Police Benevolent Fund or Post 2 American Legion through the funeral home. Online condolences, www.montgomerysteward.com