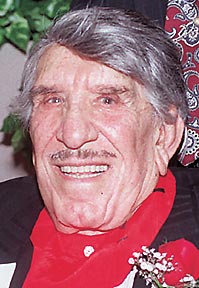 Anthony T. Capps Capozzolo was born on his father's dairy farm in Pueblo. He attended Fountain Elementary and graduated from Centennial High School. As a boy, Mr. Capozzolo remembers selling The Pueblo Star-Journal (now The Pueblo Chieftain), an enterprise which he said was highly competitive. He later worked with Mark McDonald and the Arcadians as a professional dancer at Pueblo's Arcadian Ballroom. Mr. Capozzolo left home at 18 to join his brother Dominic in Los Angeles, where he continued to pursue his dancing career. He met and married his only dance partner, Theresa Harmon, in Hollywood, where the pair worked in studios such as Columbia Pictures, MGM, Paramount and 20th Century. Throughout their careers, the Capozzolos were partners in many business ventures and social activities that raised hundreds of thousands of dollars for many charitable organizations. In August 1998, the Italian Catholic Federation honored him with the 1998 POPE JOHN XXIII award. The award is given to those of any denomination who 'best exemplify the spirit and tradition of the late Pope John XXIII.' Criteria for the award include achievements in the community, civic endeavors, an ecumenical spirit and charitable and religious activities. In addition, he served as a charter member of the Assistance League of Palm Springs, the Auxiliary of Eisenhower Medical Center in Rancho Mirage, CA, the Desert Hospital Auxiliary in Palm Springs, the Opera Guild of the Desert, the Palm Springs Desert Museum, the College of the Desert Foundation, and a life member of Pathfinders. He established an art gallery at St. Martin's Abbey and College in Lacy, Washington in memory of his late wife Theresa, and generously funded the Stations of the Cross at Roselawn Cemetery and St. Benedict Statue as well as the Tri-County Football Hall of Fame, located in Pueblo. Always a loyal benefactor and supporter of the University of Southern Colorado, the Art/Music Building on campus was renamed the Capps Capozzolo Center for the Arts, Humanities and Social Sciences in his honor. Over the past several years, Anthony provided annual income stream to support creative and performing arts at USC. He is responsible for many scholarships for deserving students, and established the Capps Capozzolo Award for Excellence for graduating students who display academic excellence by achieving a 3.5 GPA or higher. He also created and funded the University of Southern Colorado Education Summit, a popular conference for k-12 educational leaders across the state of Colorado. Additional contributions to USC include campus sculptures, art, real estate, personal possessions and cash disbursements through the Anthony T. and Theresa H. Capps Capozzolo Trust. Survived by his cousins, Lucille (William) Kenworthy of Pittsburgh, Pennsylvania and Grace Weinel of Denver; niece, Jacqueline Harris; nephews, Eugene Harris and Charles Capozzolo; many great-nieces and great-nephews and his care-giver, Patty Stolma of Palm Springs, California. Mr. Capps will lie in state in the Montgomery & Steward Chapel, Sunday from 12 noon until 5 p.m. Funeral Mass will be held 10 a.m. Monday, October 8, 2001, at Sacred Heart Cathedral, 11th and Grand, with Bishop Arthur Tafoya as Celebrant. Emtombment, Roselawn. Those who desire may make memorials to the Capozzolo Scholarship Fund at USC through the funeral home.