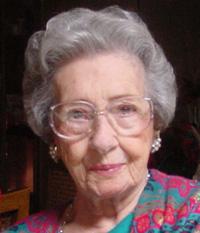 Annette M. (Niccoli) Cardinal, a very young 94, passed away quietly on July 22, 2004, following a brief illness. Preceding her were her beloved husband, Robert (1988); parents, Mary and Michael Niccoli; sisters, Josephine M. Kendall, Inez and Josephine Niccoli; and brothers, Joseph, John, Charles 'Sid,' Victor 'Vic' and Albert 'Barney' Niccoli. Left behind to cherish Ann's memory are her loving daughter, Cindy (Tom) Haulik; granddaughters, Amy and Sara, all of Alpharetta, Georgia; brother, Frank (Wanda) Niccoli of California; sisters-in-law, Blanche, Clara and Geri Niccoli; adored nieces and nephews of Pueblo, Anita L. 'Skip' Kendall (with whom she lived with the past nearly 6 years); Ronald and Connie, Jim 'Bud' and Kay, and Paul W. Kendall; many more nieces, nephews, great- and great-great- nieces and-nephews, whom she loved dearly. Ann was born in Crested Butte, Colo., on November 28, 1909. She knew many hardships; but managed to live a full, happy and extremely productive life. She spent the better part of her adult life in Fountain Valley, California, until moving to Pueblo in October of 1998 to live with her sister Josephine. To say that Ann was generous, thoughtful, selfless, kind, and beyond creative, would be a gross understatement. There are no words to describe her and how many many lives she has touched. She was an angel before her passing. Ann's hands and mind were never idle; she was planting flowers, redecorating something, and constantly sewing, crocheting, or quilting something to her last days, and always for someone else. Up until the time she moved from Fountain Valley, Ann was involved with the Girl Scouts, the Friends of the Library, the Fountain Valley Historical Society, the Women's Quilting Club, and the Fountain Valley Women's Club, and surviving family member of the SS Russell naval ship each of which she held several official titles. These clubs and activities were her life and to leave them behind was a very traumatic experience for her; for these loving people she left behind were all like family to her. And to her last day, she spoke of them fondly. Ann leaves a legacy behind, which most of us only dream of and not just memories but material things. She has left us with hand-sewn quilts, which have won prizes at state fairs, hand painted china plates, nick-knacks, and statuettes, embroidered and crocheted items we all hold so dear. There was absolutely nothing this pretty lady could not do if she wanted. She leaves a giant hole in the lives of the living; but fills a well-deserved space in heaven. Graveside services will be 10 a.m. Tuesday, July 27, 2004, at Mountain View Cemetery (enter west Acero gate). Monsignor Marvin Kapushion will preside. Please omit flowers and food. Donations may be made to the SRDA in Pueblo c/o Montgomery & Steward Funeral Directors, 1317 N. Main St., Pueblo, Colorado 81003. Online condolences, www.montgomerysteward.com