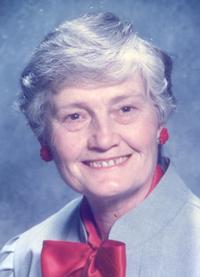 Anna Marie McQuarrie, 86, of Pueblo, Colo., passed away April 24, 2007. Survived by her children, Marianna (Jim) Harbert of Pueblo, Frank O. McQuarrie, Jr. of Norman, Okla. and Bruce (Kathy) McQuarrie of Cordova, Tenn.; sister, Dorothy Grace Elze of Pueblo; sister-in-law, Sandra McQuarrie; grandchildren, Tammy (Randy) Harris of Fowler, Tim Harbert of Denver, Tom Harbert of Denver, James (Brooke) McQuarrie of Ft. Collins, Colo., Heather (David) Colvin of Washington, D.C. and Michael (Michelle) McQuarrie of Whitesboro, N.Y.; 12 great-grandchildren; and one great-great grandson. Preceded in death by her husband, Frank O. McQuarrie, Sr.; and parents, Clarence and Mabel Hoer. Anna was born Nov. 8, 1920, in Pueblo. Life member of First Church of Christ Scientist. She was also a member of P.E.O., Chapter FW and Thursday Club. Her family feels lucky to have had Anna in their life. They thank the staff of Sharmar for the care given Anna. The family can be reached at Marianna and Jim's home. As per her request, there will be no viewing or service. Cremation, Montgomery & Steward Crematorium. In lieu of flowers, memorials may be made to charity of donor's choice. Online condolences, MontgomerySteward.com