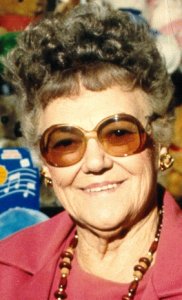 Anna L. DeLap passed away March 6, 2000. She would have been 95 on May 31st.She was born in Leeds, England to Alfred and Florrie Louisa (neé Booth) Brayshaw. She was preceded in death by her husband, Welsey D. DeLap, Sr. on January 31, 1996; stepson, Wesley D. DeLap, Jr.; and sister, Esther B. Fagerquist on January 30, 1986. She is survived by step-grandchildren, Wesley David (Bonnie) DeLap of Newalk, California, Dennis Ray (Carol) DeLap of Pueblo, Kenneth Wayne (Elizabeth) DeLap of Pueblo and Denise Paige (John) Hartle of Liberal, Kansas; nieces, Winifred (Dave) Wheeler of Oregon City, Oregon, Doris (Jim) Craddock of Oklahoma City, Oklahoma and Linda Tomkins of Pueblo; nephew, Clarence Hassler of Pueblo; 11 step-great grandchildren and 3 step-great-great grandchildren. Anna was loved by friends and family alike. To Winnie and Doris she was always a very 'Special Aunt.' Anna received her naturalization papers of the U.S.A. on April 15, 1949, in Cañon City, Colorado. She served as a volunteer at Parkview Episcopal Medical Center as a blue lady and worked in the gift shop for 32 years. She received special recognition in 1986 and was Volunteer Of The Year in 1990. She also received a Membership Award for being active in American Business Women's Association. Anna enjoyed attending First Baptist Church when she could. Anna's family would like to thank the staff of the Pavilion at the Pueblo Villa for the care they gave Anna. A special thank you to Linda Tomkins and Carol Delap and their families for their care and special attention given to Anna. The family will receive friends at the funeral home today from 4:00 p.m. until 6:00 p.m. Graveside service will be held 11:00 a.m. Thursday, March 9, 2000, at Mountain View Cemetery (please enter the east Acero gates) with the Reverend Wayne Dvirnak officiating. In lieu of flowers, memorials may be made to a charity of donor's choice or Scope Ministries International, 700 NE 63rd St., Oklahoma City, Oklahoma 73107.