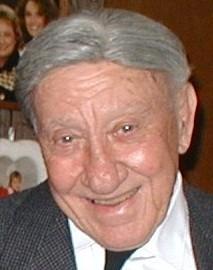 Angelo Patti, 90, passed away on Sunday, January 25, 2009, with his family by his side. Survived by his wife of 63 years, Elsie; daughter, Barbara Droessler; sister, Rose Ford; daughter-in-law, Judy Patti; granddaughter, Amy (Brian) Turner; grandsons, Anthony (Shannon) Patti, Aaron Patti, Chris (Edie) Patti, J.J. (Melissa) Patti and Michael (Heather) Droessler; great-grandchildren, Joey and Morgan Patti, Lauren, Vinny, Gino, Sonny and Ella Patti, Kennedy and J.J. Patti, J.C. and Jackson Turner, Michael and William Droessler; and numerous nieces and nephews, and extended family. Preceded in death by is son, Jim Patti; parents, Joseph and Phillipa Patti; brothers, Sam, Lawrence, Charles, Tony and John; and sisters, Mary Clementi and Pat Fellion. Angelo was born to Joe and Phillipa (Cucharo) Patti on October 20, 1918, in Plaquemine, Louisiana. He was raised in Pueblo and graduated from Centennial High School in 1936, the same year he co-founded Patti's Restaurant of which he owned and operated until The Lord required him. Angelo defended our country in WWII 'the big one' with the U.S. Army from 1942 to 1945. He was a member of the Shrine of St. Therese, in Pueblo. Angelo enjoyed spending time with his family, hosting Super Bowl Parties, talking about the stock market, attending football games, fishing, telling jokes, and most of all enjoying coffee and breakfast with his friends and family every morning for over 70 years at Patti's Restaurant. Angelo will be dearly missed for his jokes, poems, stories of selling newspapers with his brothers, whistling old tunes, singing in English and Italian, and playing the accordion, piano, organ, sharing tales of life at 'Goat Hill University,' and setting us all straight from time to time. Pueblo has lost a true historian who cared deeply about Pueblo and its residents. Angelo, without a written note, could recall amazing details regarding This World, This Country, This State and especially This City! Viewing from 10 a.m. to 3 p.m. today in the Montgomery & Steward Chapel with the family present from 1 to 3 p.m. Rosary, 6 p.m. today and funeral Mass, 10 a.m. Thursday, January 29, 2009, with the Reverend Father Liam Courtney as celebrant. Both services at Shrine of St. Therese, 300 Goodnight Ave. Military honors by Pueblo Veterans' Ritual Team and entombment at Roselawn Cemetery. In lieu of flowers, memorials may be made to American Cancer Society or Right To Life, through Montgomery & Steward Funeral Directors, 1317 N. Main St., Pueblo, Colo. 81003. Online condolences, www.montgomerysteward.com